As dragons in Korea are part of mythology and as many wars went through the country you can meet some scents of them only occasionally. Places were you will find them for sure are budhistic monasteries and temples. Wonderfuly carved, dragons are members of guarding crew around roofs.

When I was preparing this post I had in my head several pictures, details cought by my camera in few monasteries. But then, while searching the hard disk I found out that all those pictures got lost when our external hard drive broke down few months ago...hmm what a surprise, technique is not the "blue chip". Never mind. So I decided to show you few pictures from Ssanggyesa temple and share with you story of the tea I had bought there. For those who are interested to learn about the history and meanings of Dragon in Korean Buddhism I would highly recommend this .PDF paper from buddhism.org


About our trip to Hadong county you maybe have already read on Morning Tea Crane blog. One of the finest memories from our trip are from Ssanggyesa temple. Even though it is quite famous place for its tea festival and large numbers of visitors go there every year, we have spent there very calm moments.

Although before our visit it the tea temple we have already bought enough tea (ok, there is no term like "enough tea" but our baggage were far over weight...), I was so impressed by nature of those moments that while visiting the "dharma shop" there, I looked for something special to help me keep the spirit of this place alive, when I return back home.

I have chosen balhyocha made in the temple. So how it is now, seven months and eight thousends kilometers away? 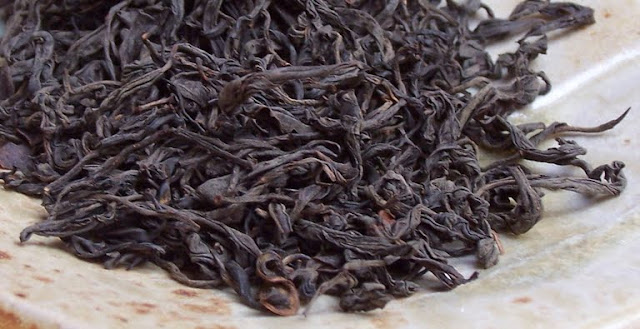 The tea was three times more expensive then all balhyocha there. My guess was that the reason for this price was that leaves come from under-bamboo tea plantation. It probably comes from semi-wild, shadowed tea bushes. When I open fancy package and then air proof bag the strong, spicy aroma surprise my mind. Now after seven months it is not so intensive but still key distinguishing feature from others Korean oolong I have at home. There were attractively shaped, only slightly broken, brown to gold-green leaves.


After "rinsing" infusion the spicy fragrances again hit my nose. Cloves oil with sweet orange peel. In first infusion there is a little bitterness in the taste but fragrances are sweet and winsome. Scent from fair cup have take me twice longer then drinking... 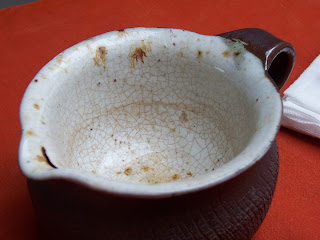 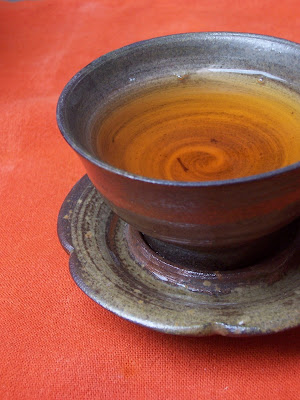 The color of the brew tells us why another name for this kind of tea in Korean is Hwang Cha where hwang means yellow. Yellow tea that what it is. In second and third brew I find more and more sweetness and basic taste become heavier. Honey and aroma of some "heavy" flowers maybe orchids with hint of chocolate. Hm...I like it. 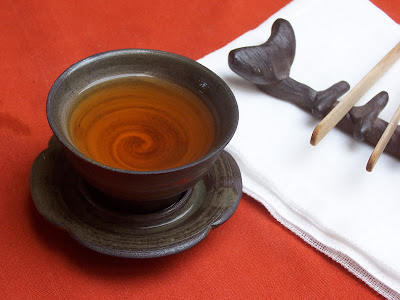 Energy of this tea is strong but not aggressive rather balmy and soothing. Also the sweetness becomes really strong. Drinking this tea I feel honey but the sweetness is more like from sugar-cane 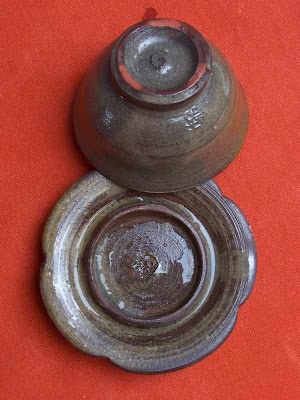 The cup is work of Korean potter Oh Soon-Teak. Beauty of pots is highlighted when we are using them. Glaze is very thin, high iron clay and light white slip decoration under the glaze inside the cup. 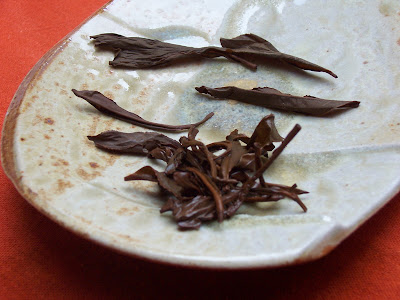 Study leaves after tea session I see strong, pretty long (compare to balhyocha I know) individual leaves. Sometime for balhyocha are used tea leaves which are too weak for Nokcha (green tea) or leaves from latter harvest - but this was not this case here. I used relatively big amount of dry leaves and enjoyed seven, eight good (and really sweet) infusions.


To learn more about Korean oolongs - Bylhyocha - pleace visit and search on Matt and ChaDao blogs.