One of the ways how to learn a bit more about particular kind of tea, style or tea region is to stock your tea cabinet with it and then...drink it.

Mengku is still kind of mystery to me. Almost all what reach my cup so far have aroused kind of ambivalent feelings. To put it into words I would say "I like it, but I really do not know why, there is not much to like but I do and I want more" To break this down, I decided to go through six Mengku teas in, let say, competition way. No so much in order to label winners and losers. Side by side testing helps me to understand differences and resemblances, Plus, it is always real fun: Sitting, sipping here and there, sniffing for hours - enjoying time devoted only to myself.

Plus it is sunny day, so lets spend it with tea outside! 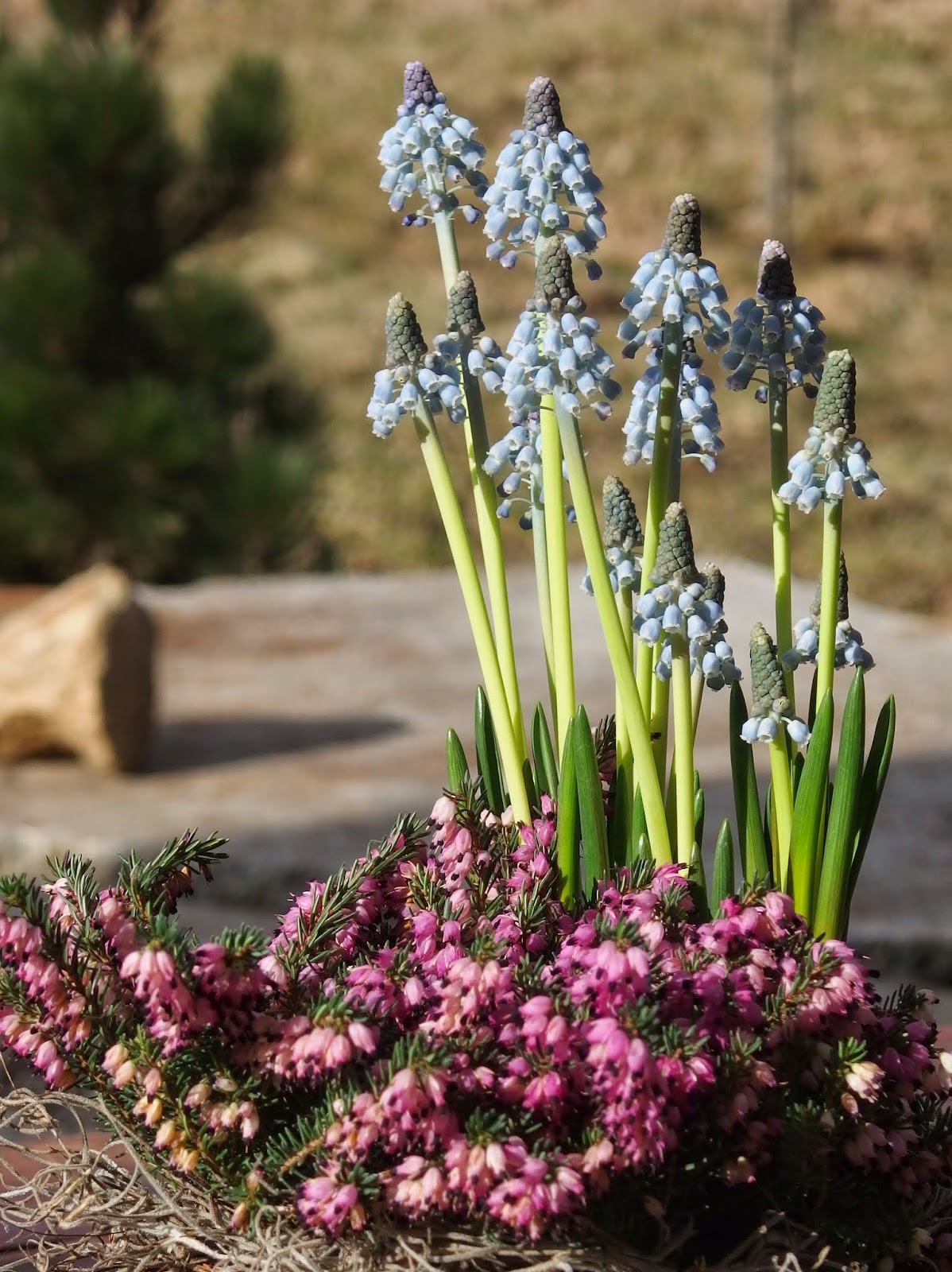 There are more ways how to taste-compare more teas in line. I prefer to use small shiboridashis with matching cup. It alows me to make several brews of several teas at once. It can also go as close to "gong fu" as possible. And, with some imagination, you can know how each tea will perform in teapot during more serious tea session. 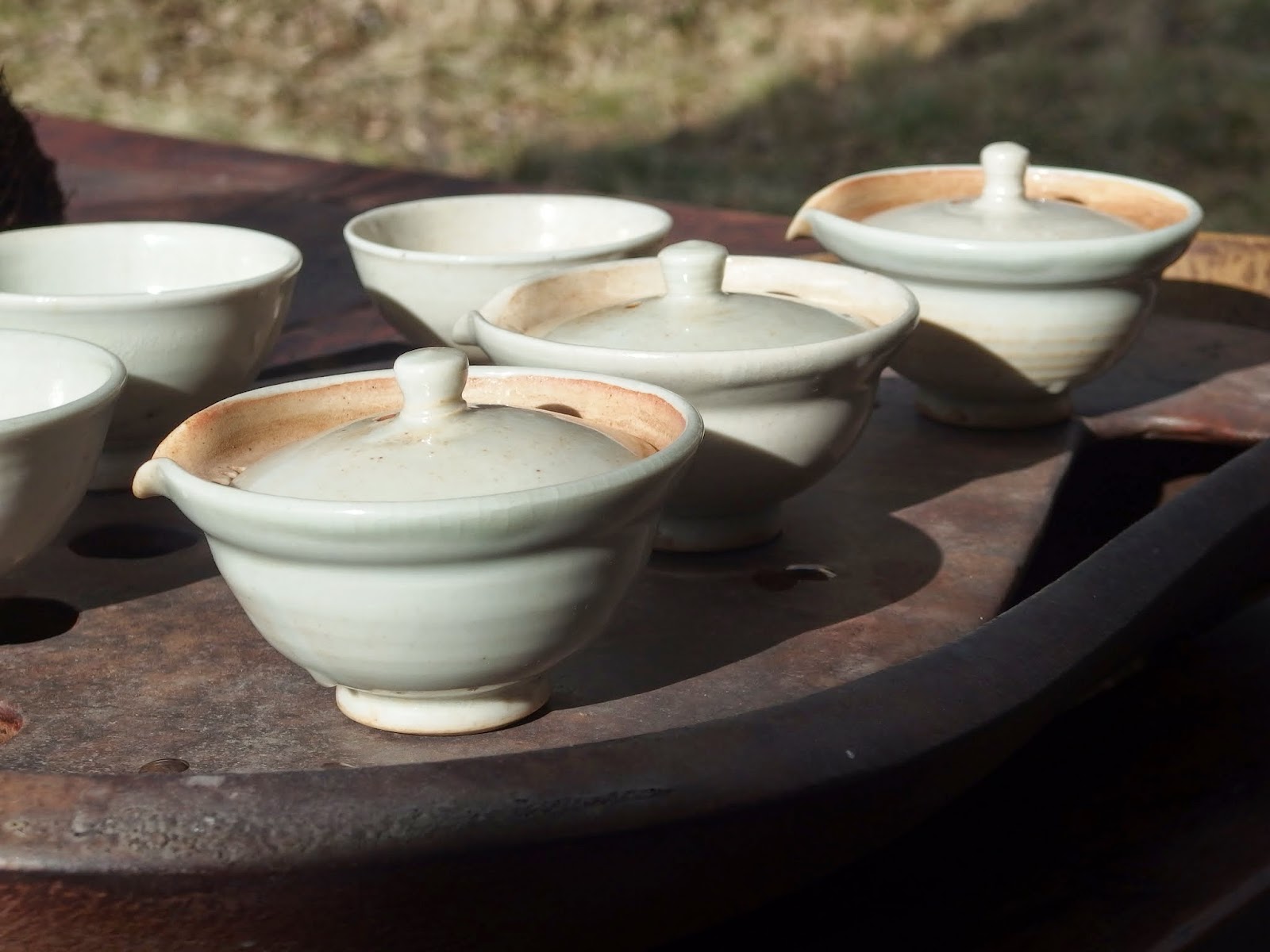 All teas I have here are (according to labels ) from 2006, just one 2005. That is good. To avoid mind-lost, I cut the "competition" in two parts followed by finale. Round number one with three teas from Scott's YS and round number two with 2005 Shuangjiang from TwoDog (the cake was around 70$, sold out few months back), over-famous BingDao from Peter of Pu-ehr.sk  (sold out as well. Can you imagine that this cake was around 40$ just 3-4 years back? There is not reasonable exuse for me why I did not buy few tongs back then) and DaXueShan from legendary EOT. 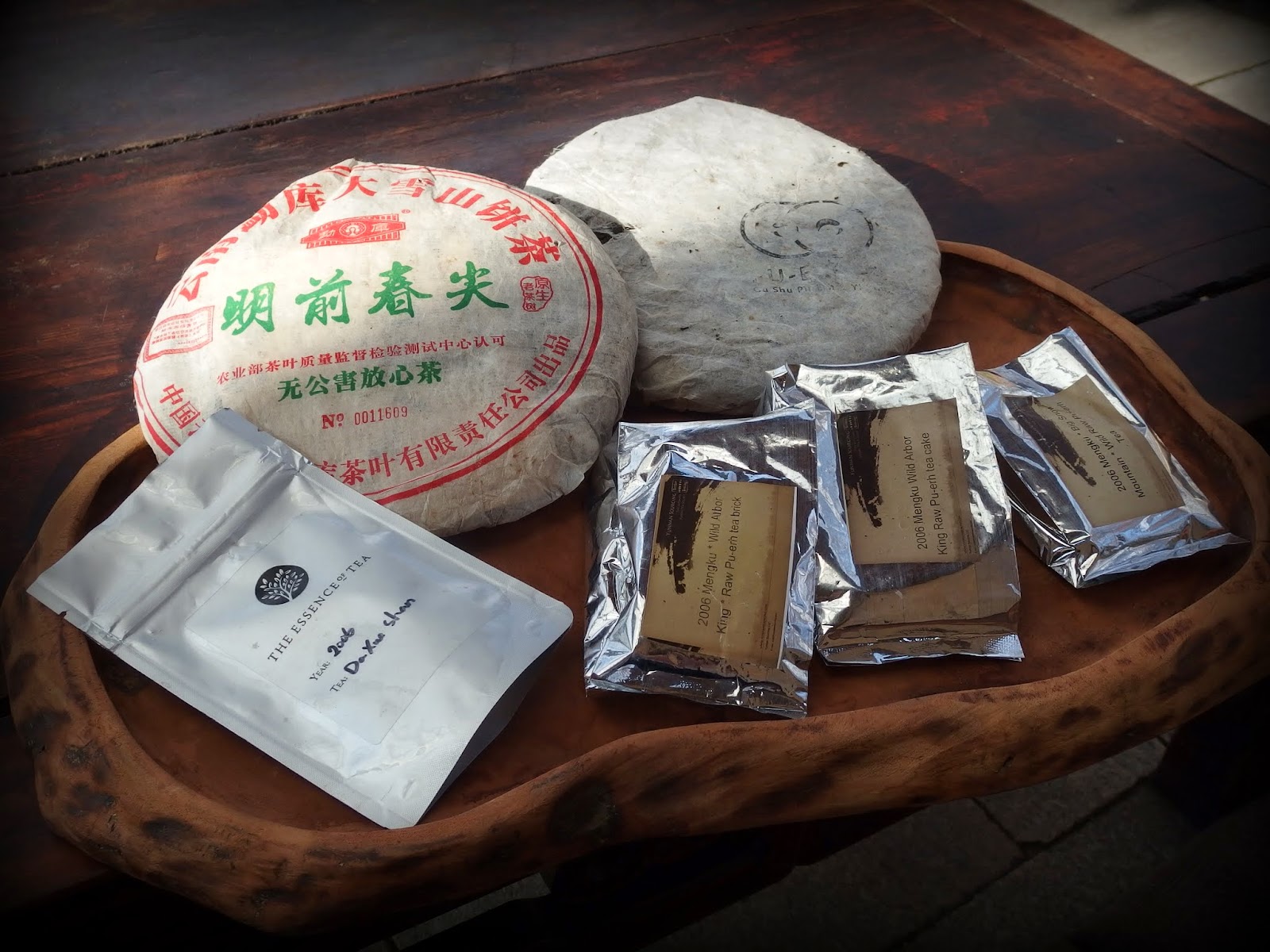 Are you ready for the round one? 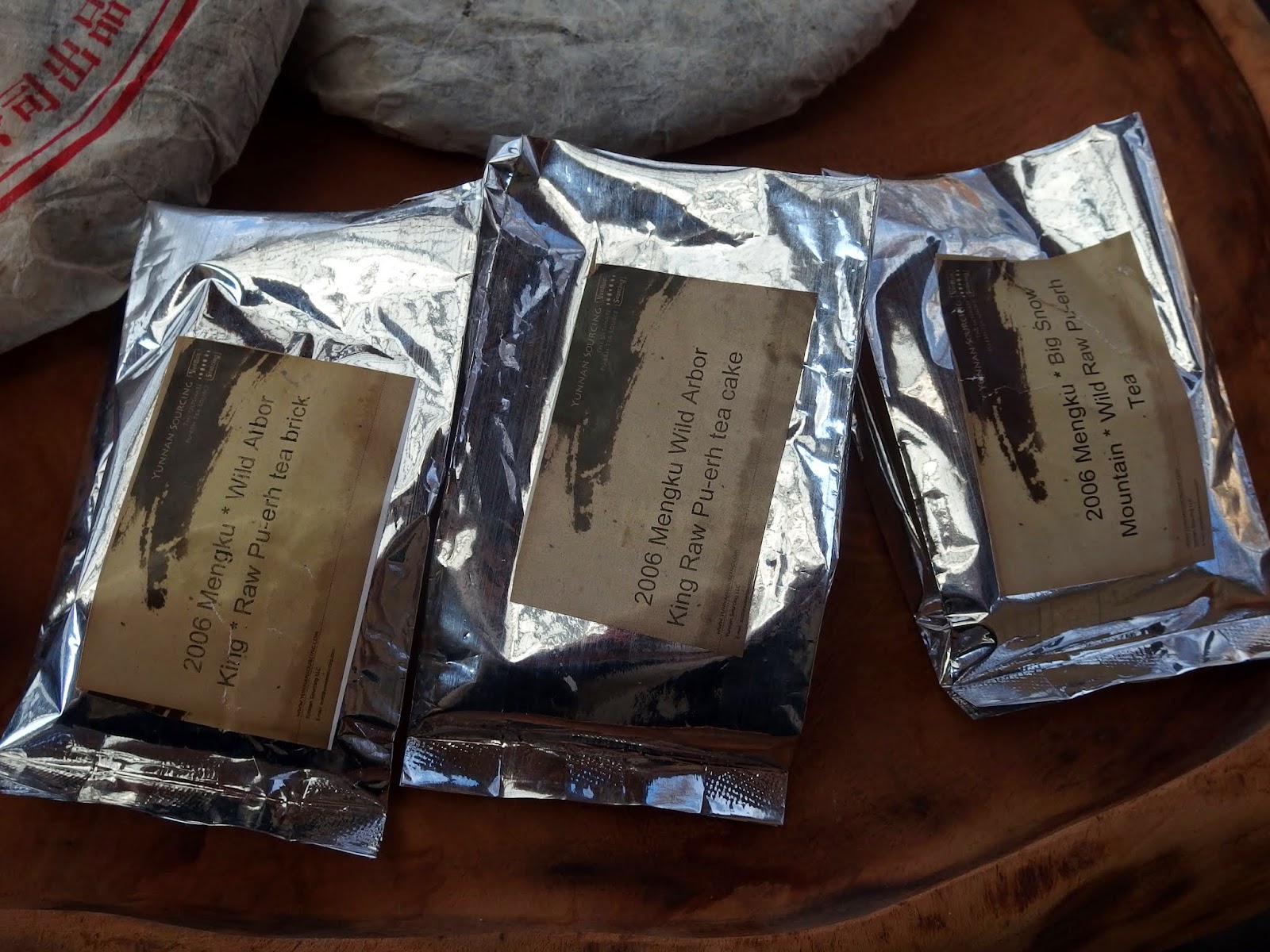 We can put aside names, I think it does not say much to us. Wild Arbor King brick, Wild Arbor King cake (both from BingDao area), Big Snow Mountain Wild...Honestly all that sound to me too good to be 100% truth. Especially if we know that Shuanjiang is tea factory with huge (I heard hundreds of tons) production for each release. It does not mean just that Wild King will have just a part of "wild king" leaves in it, but also that sample does not say much. If my 20g of tea is smoky-bitter it does not mean that ten tons down the road it will be also smoky-bitter. That been said, my "competition" is really more about learning of what Mengku is then looking for the best tea. 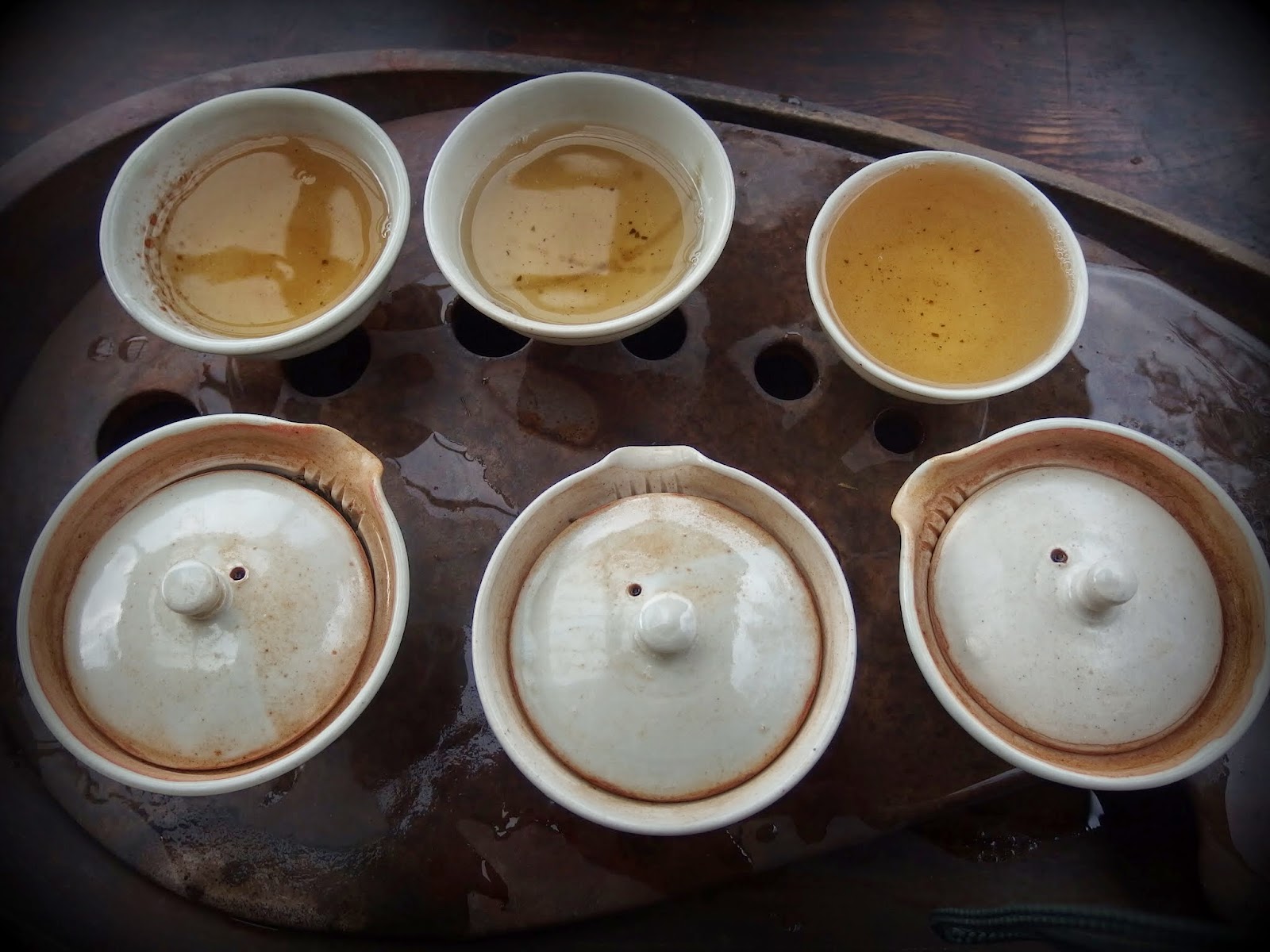 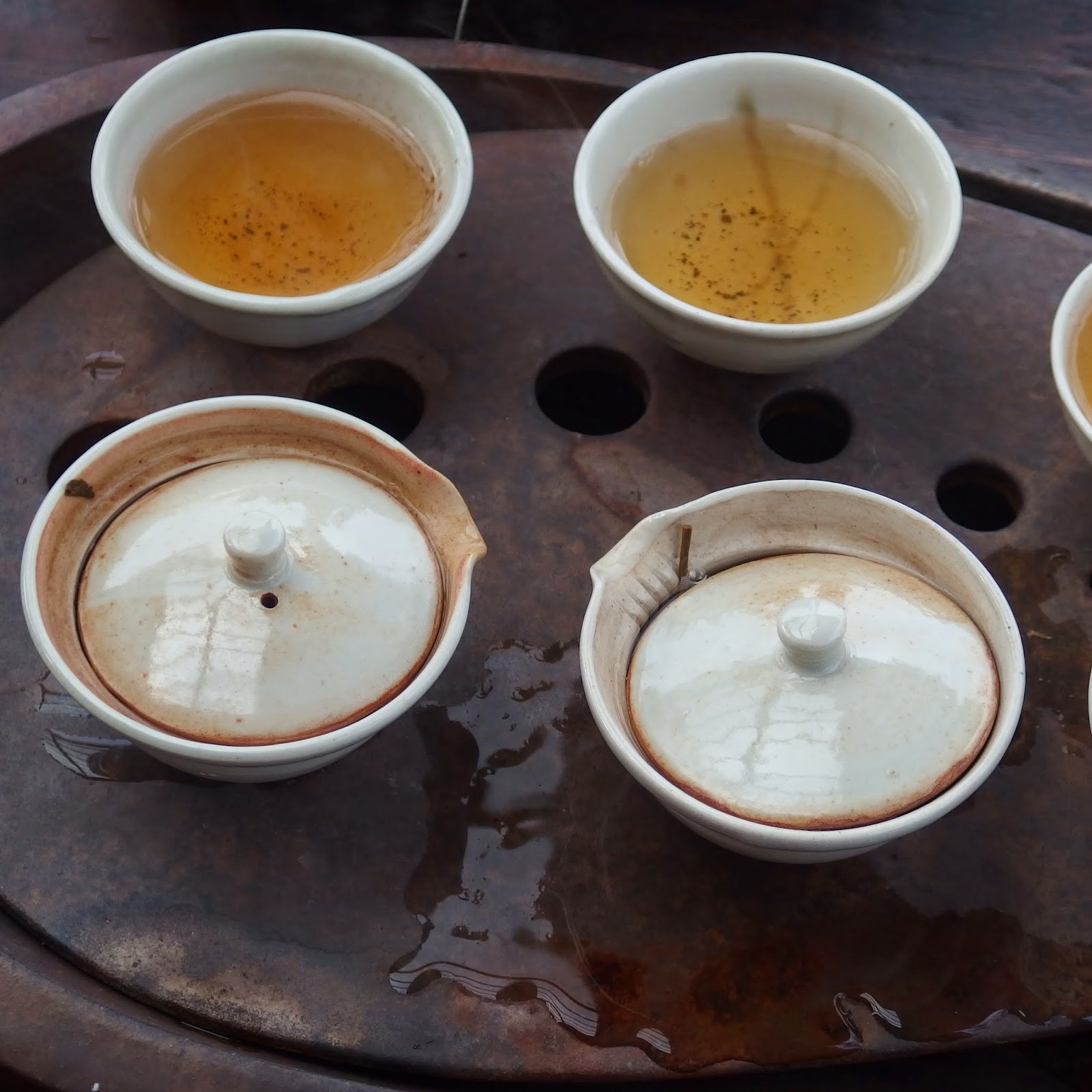 I can say I like all three samples. Just by dry leaves the "wild king cake" wins, more hairy, unbroken leaves with nice smell. From the first brew, it is clear that teas are really siblings. The "wild king brick" and "wild king cake" should made of the same batch of leaves. Maybe. But the brick is pine-smoky and I am still not sure if I like it. The cake have also more distinct taste. Big Snow Mountain (DaXueShan) performed as more subtle, lighter tea then those "kings". All three have trace of pleasant bitterness. And even if I would read their story on YS site, I would label them as "nice dry stored"

Would you like to hear a verdict or recommendation? Then if you are after mouthfeel and you do not mind light smokiness, then go for brick (it is also cheapest one) If you are after taste and looking for bitterness, go for "Wild King Cake" That would be my choice. If you like lighter, fragrant teas, then give a try to Big Snow Mountain. To this one, I will definitely give it a try in stronger leaves-water ratio! But for now, tamtadada, "2006 Mengku Wild Arbor King Raw Pu-ehr tea cake go to finale! 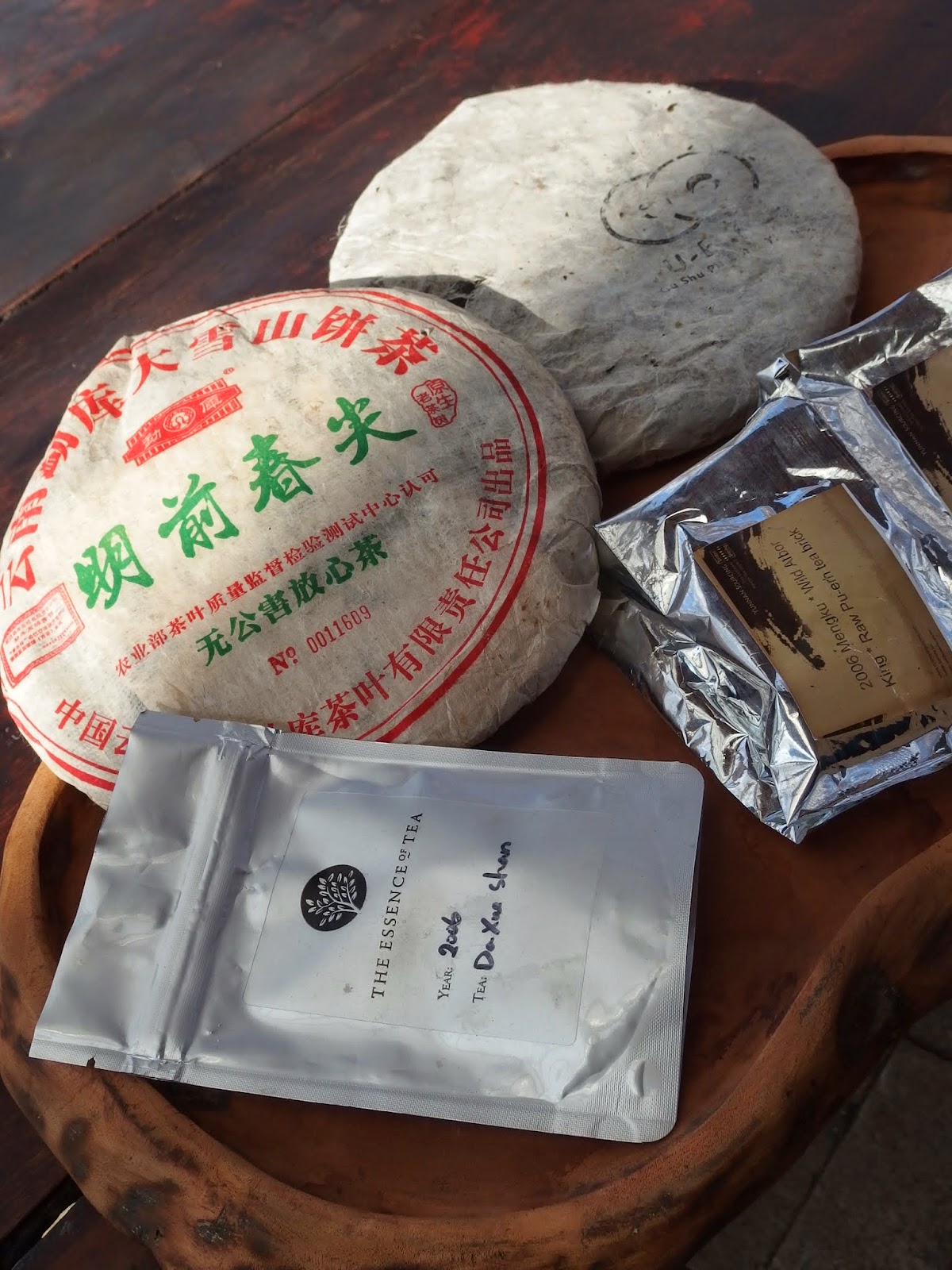 Teas in the second round are not so similar to each other. Also I have whole cake of 2005 Shuanjiang and Puehr.sk BingDao so I know them pretty well. The EOT DaXuaShan leaves are from 2006 but were pressed in to cakes in 2013. I know that is does not say much (ok, it actually says nothing) but here you can see leaves from the second round of my competition: 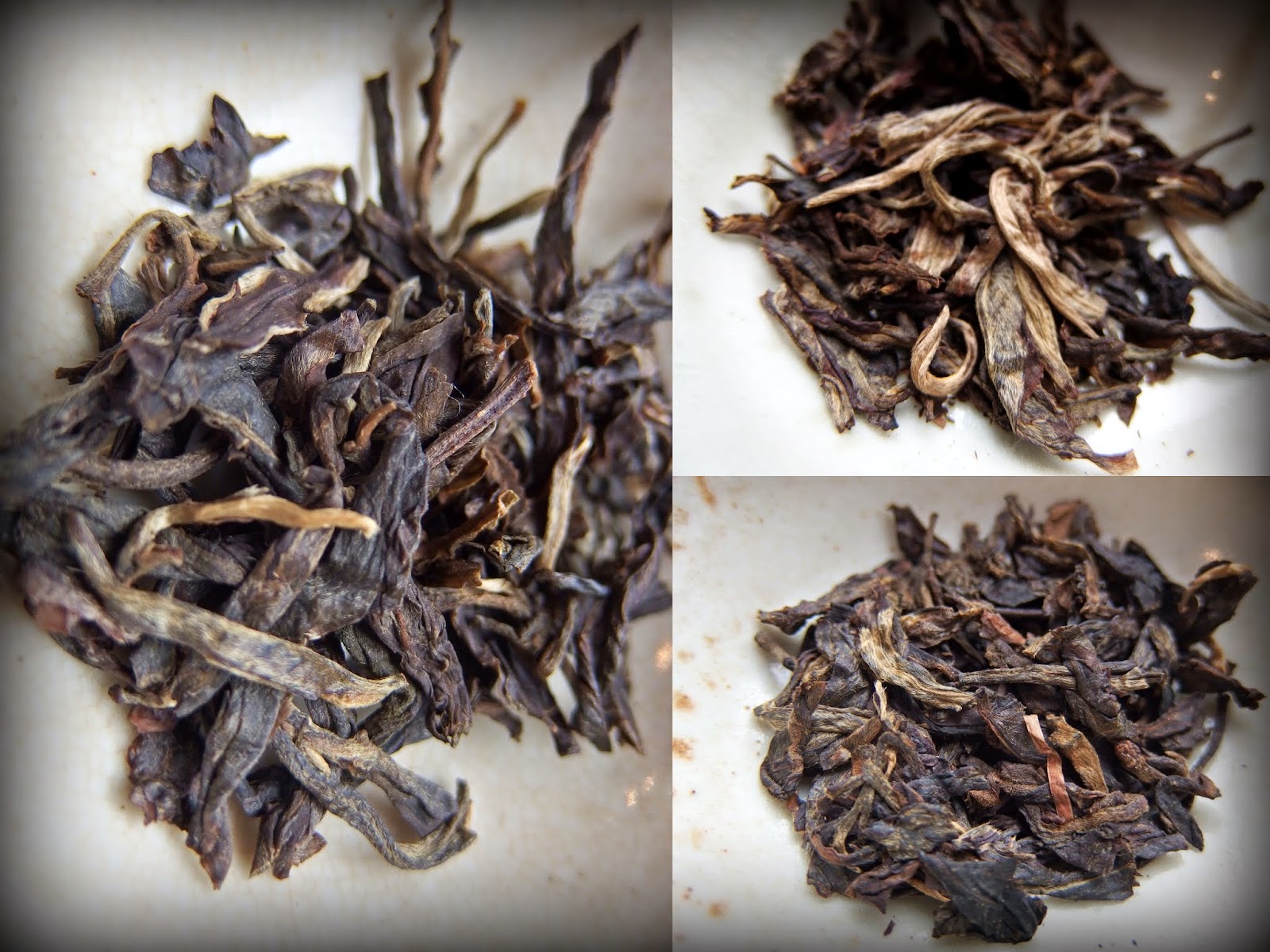 Like in first round, I like all three teas. 2005 from White2Tea is much more aged, it was definetely in wetter/hotter place for some time. It is less complicated, I like such teas for everyday drinking. distinct but not easy to go wrong. BingDao is again more striking than DaXuaShan. This BingDao is actually quite close to what I remembered from YS cake. But this time DaXueShan is very clean, and have very nice "fresh mountain water" effect in mouth. I love it, love its clean energy. Generally, these three teas are more appealing, maybe because they are not so similar to each other. But truth is that you would as me "you can have tong of one of them, which do you want" it would be much more difficult to choose. Please, tong of each!! But for now, tamtadadadada, 2006 BingDao Puehr.sk go to final match with the winner of the first round. (dont say it anyone, but I really want to see if they are some similar as my notes says)


I have to admit that when I put 3g of those teas next to each other, they are so similar that I almost lost the track which one is which. 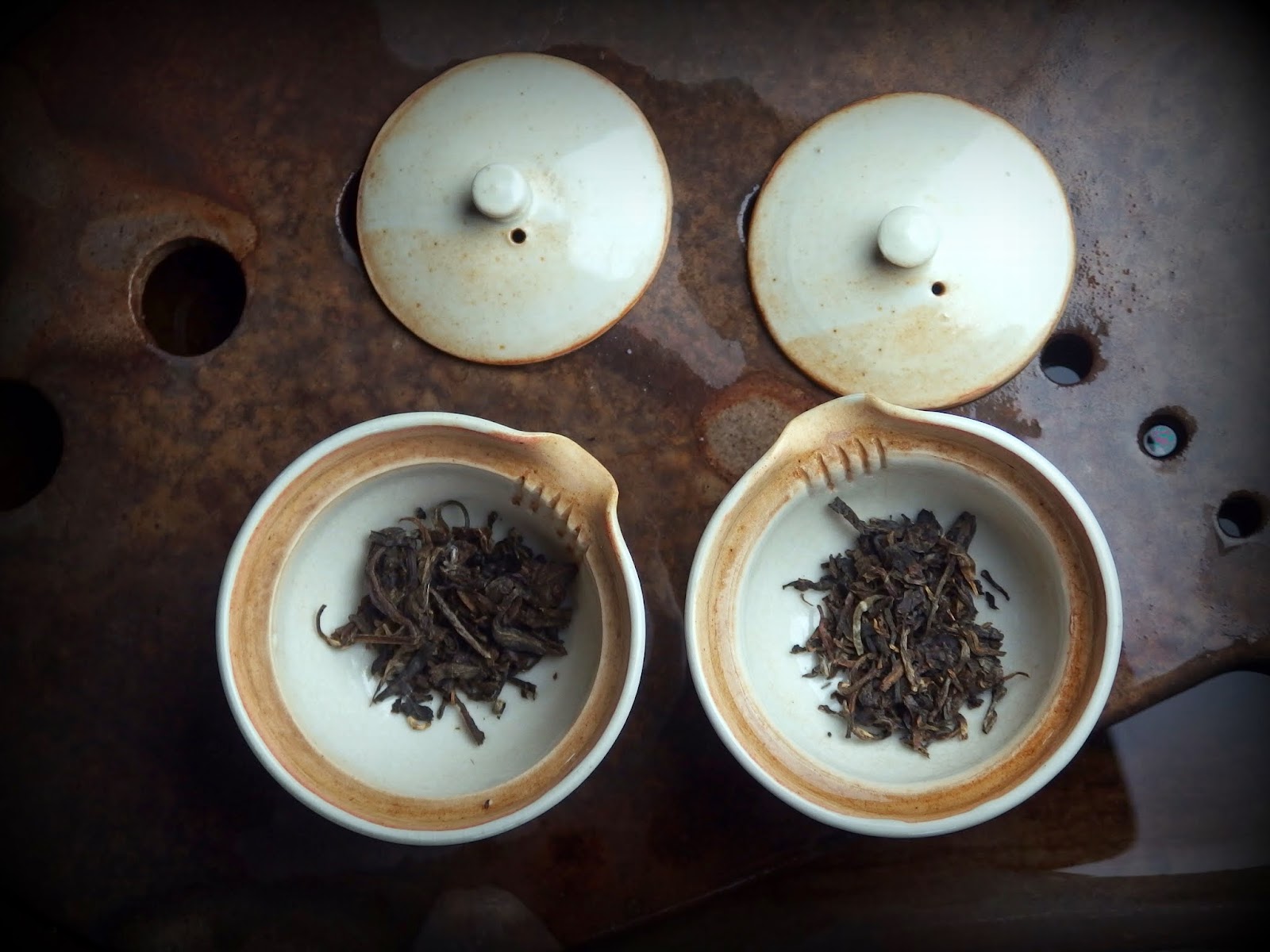 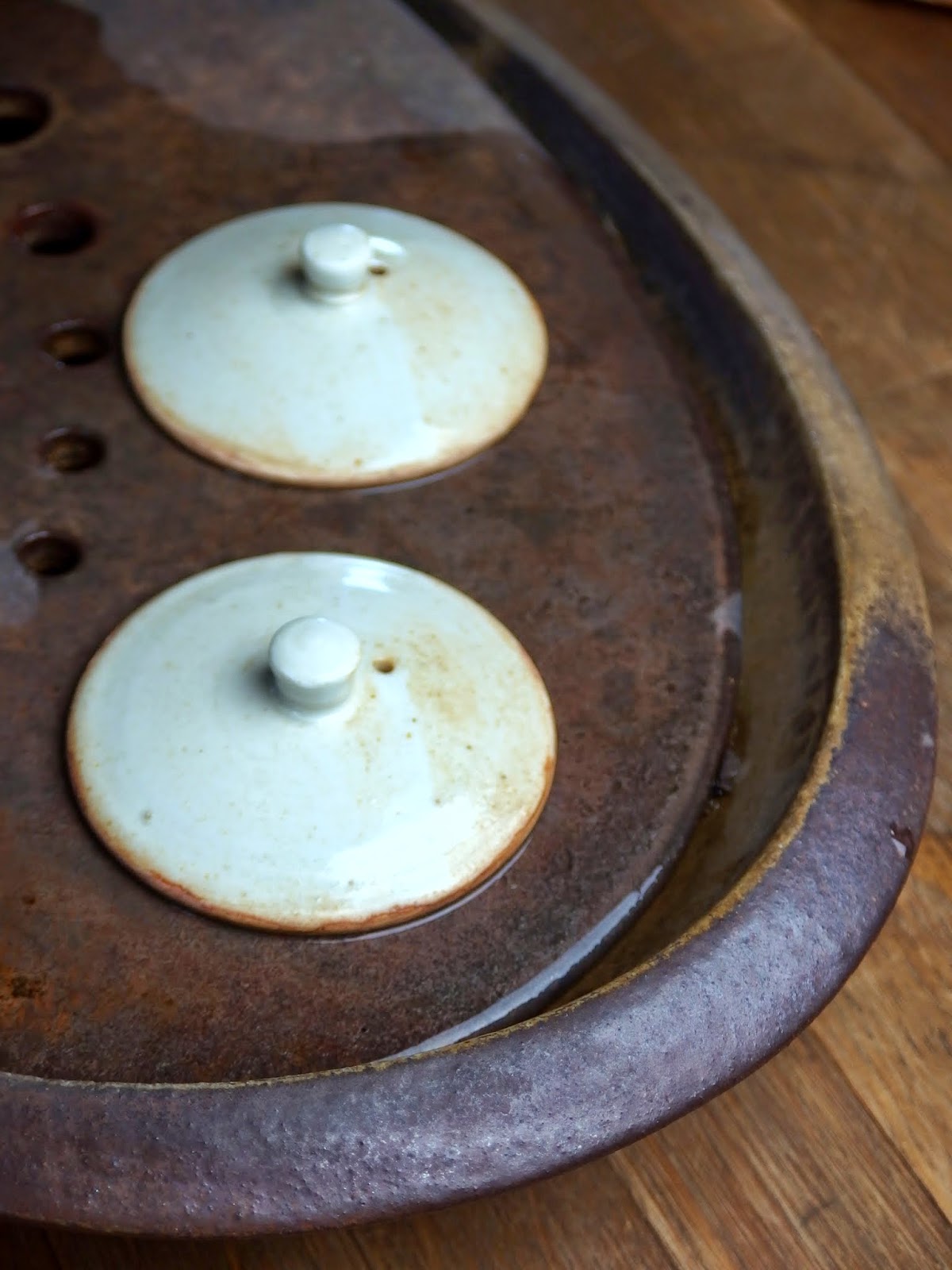 But first brew and all is clear. Taste is very close. BingDao is finer, "Wild King" more robust. This time I make it stronger with longer steepings. Now I understand the claim on YS site that these teas are sold as fake LBZ. Bitterness and power is there. BingDao from Pu-erh.sk is cleaner, finer tea. Wild King over-role in strength and taste-power. I like this but there is also something a bit harsh. I will probably go for a cake, just to see how this will go in few years. 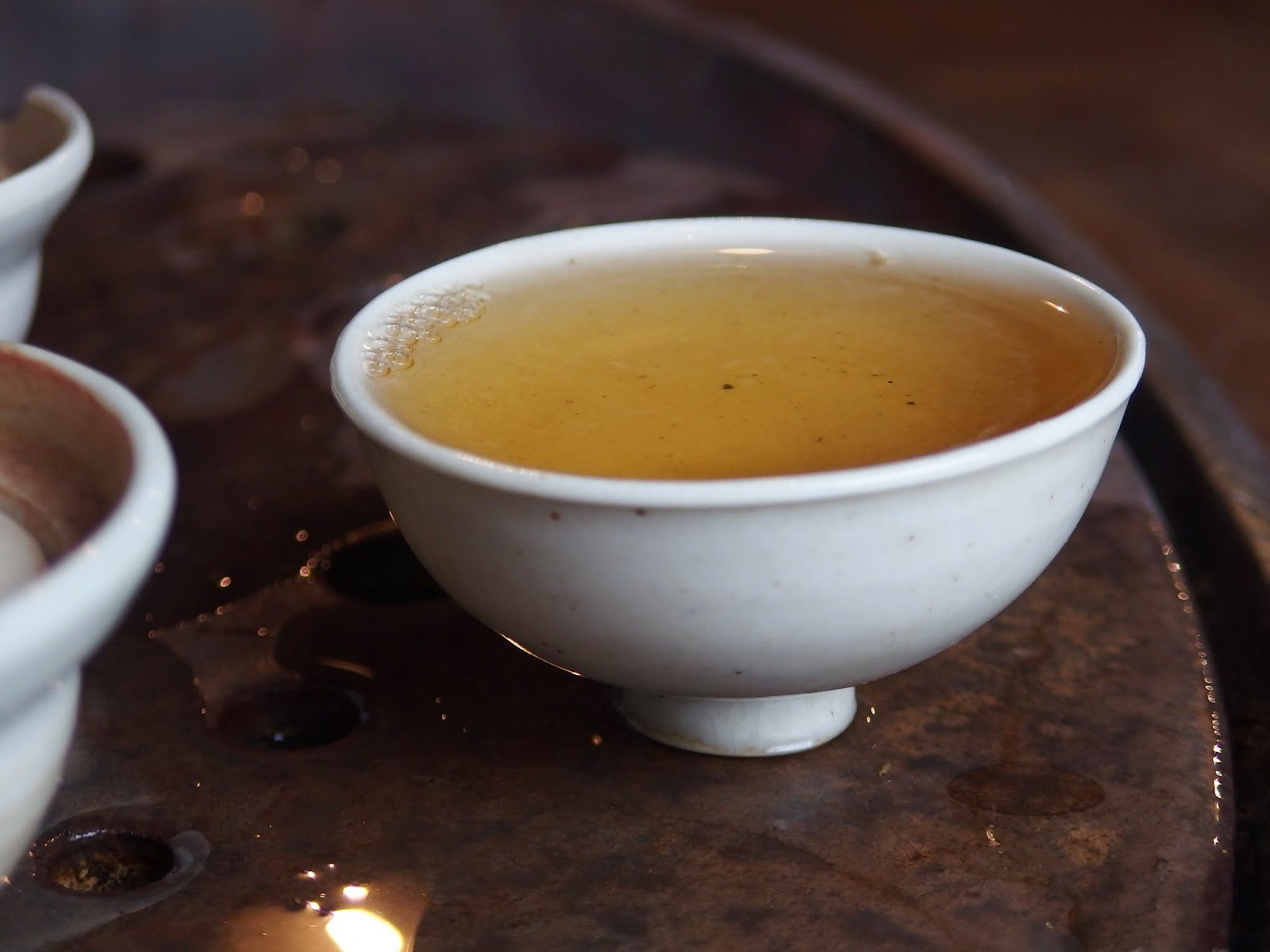 Being tea-drunk while writing these lines, tamtadadadadada, the BingDao is winner here. Smooth, easy for stomach, pleasant for throat but still mysterious and complicated enough to be called shallow.
After today, I know a bit more about what Mengku tea means. But I also know that there are other shade of this region and I look forward to meet them in my cup. Anytime... 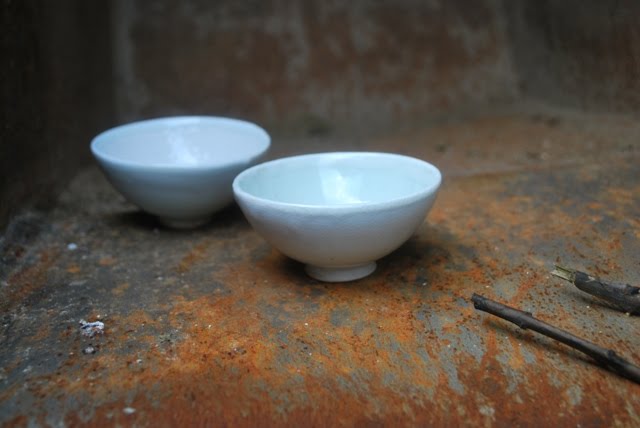